Internships are a major part of the teaching of students in the Ship Engineering specialty of the Shipping Centre.

To this end, a separate building for workshops and laboratories was built in 2015 in the courtyard at the Kopli 101 Maritime Academy, which was fully furnished and adopted at the beginning of the 2016 academic year and named the Admiral J. Pitka Engineering House. The two-storey, bright building has a locksmith workshop with 16 workstations, a metal-cutting workshop with metal-cutting machines: 4 new modern lathes, 2 milling machines, a vertical milling machine, circular saws, a sheet metal bending machine, and other equipment. For practical welding purposes, the building has a welding room with 5 workstations for electrical arc welding equipment with electrodes and a semi-automatic welding machine for welding with wire in a protective gas environment. In addition, the building has a refrigeration laboratory with modern working study desks, 2 classrooms, staff rooms, and auxiliary rooms.

The largest and most exciting part of the building, however, is the 2-storey diesel lab at the southern end, with plenty of working equipment and exhibits. The diesel lab has a functional ship power plant with two diesel generators, each with 100 kW and 40 kW emergency diesel generators, along with all necessary piping and electrical systems and support mechanisms. In addition, there is an operational auxiliary boiler, 3 compressed air compressors, a fuel separator, a water desalination unit, an electro-hydraulic steering machine, and a large number of educational machine sections and details. The largest unit is the B&W Alpha 16V23/30 diesel engine, which was dismantled from the ship A. Pitka. This engine is not operational, but is used by course III engineers to practice engine repair. The diesel lab room is equipped with a 5-tonne bridge crane.

There are some mechanisms and assemblies in front of the Engineering House, such as the dismantled propeller of the Border Guard Vessel PVL 107, a windlass with 2 anchors, and the hydraulic crane dismantled from the ship A. Pitka.

The Refrigeration Laboratory will teach future refrigeration mechanics how to properly handle refrigeration systems. Most refrigeration equipment uses gases that are hazardous to people and the environment both at sea and on land. Freezing equipment is found at sea on gas carriers, reefer vessels, and cruise ships; on land, refrigeration and air conditioning equipment can be found in ice halls, wood dryers, most office buildings and shopping centres, private homes, and even domestic refrigerators.

’Each cold system has an 80% indirect and a 20% direct environmental impact. The better we teach how to handle these gases, the less risk of accident and pollution and environmental impact there is. In theory, such knowledge existed a hundred years ago, but as technology evolves, automation monitoring, protection, and control systems are constantly changing and refrigeration mechanics need to be able to handle it effectively,’ explains Andrei Mozessov, Head of Division Refrigeration Technology. ‘In this lab, we can illustrate how cold is generated and how different systems can be built. As this laboratory also works with gases, we place great emphasis on safety. Before starting the systems, we check for leaks, dry and pressurise the systems, and fill them with the right amount so that there is neither too much nor too little of the agent.’

Such high-tech equipment is needed because the cold field has a major impact on the growth of the ozone layer, and the Ministry of the Environment, for example, wants to be very sure that our training is of the highest quality and the ecological footprint of Estonia is as small as possible.

The process automation lab includes eight compact workstations – the FESTO MPS® PA Compact Workstation. In addition, the automation lab room has ten desks for 20 students and one for the teacher, all equipped with desktop computers. There is also a projector and screen in the lab, which means it is perfectly suitable for lectures.

The compact workstations are designed and built for the automation and management of production processes in vocational training and refresher training. ‘The workstations provide mainly the following exercises: planning, designing, programming, operating, controlling, maintaining, and troubleshooting automated systems; familiarisation with diagrams and documentation of automation systems; operation of sensors and their correct use; P, I, and D control, and regulating pressure, flow, temperature, and level with and without feedback,’ says Harli Moosaar, Lecturer at the Shipping Centre, about the functions of the process automation laboratory.

Use of the laboratory

In addition to teaching (third- and fourth-year ship power plant students), the laboratory can also be used for refresher training of seafarers and for the training of interested companies.

In the Laboratory of Pneumatics and Hydraulics, you can organise lectures and hands-on laboratory work for students whose curriculum subjects are related to hydro-pneumatic actuators (e.g. third- and fourth-year ship engineers).

‘A hydraulic drive is a hydroelectric drive stored in a fluid medium where the energy is carried by the liquid. Hydraulic energy (fluid pressure energy) is converted into mechanical energy through a hydraulic drive actuator, which can be a hydraulic motor, a power cylinder, or the like,’ explains Jaan Läheb, a lecturer at the Shipping Centre. ‘The advantage of a hydromotor is its high developing torque (force) at small dimensions, while and its disadvantages are low operating speed and relatively low efficiency.’

Students can use ten desktops, four workstations with 8 seats and computers, and one stationary mobile hydraulics workstation that can be used to learn the construction, operation, connection, and features of a hydrostatic steering wheel. The desktop computers have software for drawing and simulating pneumatic and hydraulic circuits (10 Festo Didactic licences) that can be used to create and simulate pneumatic, electropneumatic, hydraulic, and electro-hydraulic circuits. The schemas created in the software can be used on lab workstations to design and test real-world systems.

Läheb describes that each workstation has a hydraulic station that is permanently attached to the workstation’s work surface. The hydro plants (pressure up to 55 bar) are built with two separate circuits and two separate motors that can be switched on separately. The pneumatic system is powered by an air compressor (operating pressure up to 10 bar.)

It is a multifunctional laboratory for electrical engineering, electronics, and marine electrical equipment used by first- and second-year students of all specialties. ‘As all machines, apparatus, and processes on ships and in ports use electricity, it is understandable how important this laboratory is. Until the student has the expertise in electrical engineering and electronics, they will not be able to progress to other laboratories such as automation or electro-hydraulics,’ says Albert Tobias, a lecturer at the Centre for General and Basic Studies.

Electricity in itself is a very dangerous phenomenon, especially if the person cannot use it. 100 milliamps is already a deadly current, and contact with it must be avoided at all costs. Therefore, before entering the lab with students, they must first undergo the prescribed theory and practice lessons, and be thorough in their understanding of all safety rules. Safety comes first! What makes learning and understanding electrical engineering difficult is the fact that electricity is an abstract phenomenon – it cannot be directly seen or touched. ‘To make complex electromagnetic processes ‘more visible’, the lab is equipped with specialised measuring instruments and dedicated software computers,’ Tobias explains.

A separate problem that all electricity users are facing is energy conservation. According to Tobias, in respect of electrical energy conservation, mechanics must learn how to ensure that electric motors and generators operate with maximum power and efficiency. In the Laboratory of Electrical Engineering, almost all tests are carried out at a reduced voltage of 5–25 V with minimal power losses to conserve energy. Marine equipment is subject to high levels of vibration, fluctuations, and temperature changes and is therefore protected by a special construction on board. ‘There is no need for that extra protection in this lab, because students need to learn features,’ says Tobias when comparing the lab with real life on board. ‘And looking to the future, the lab can also be used successfully to train electricians.’ 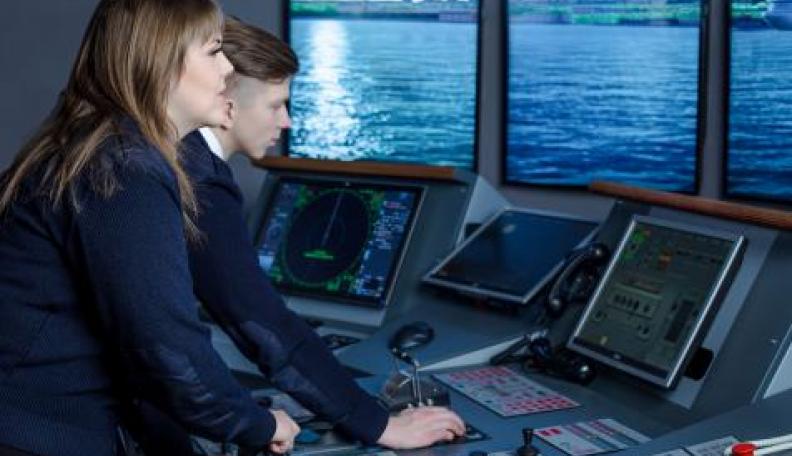 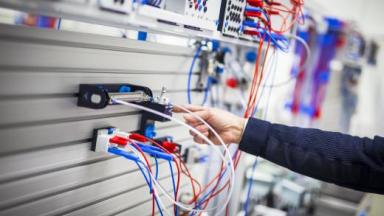 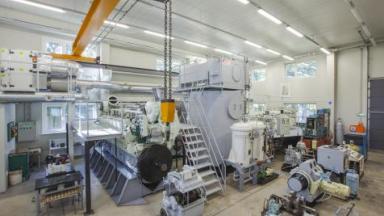 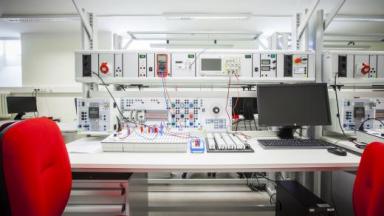 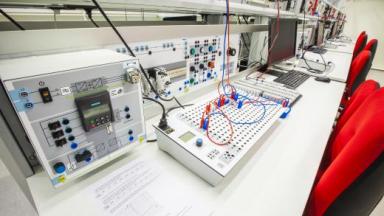 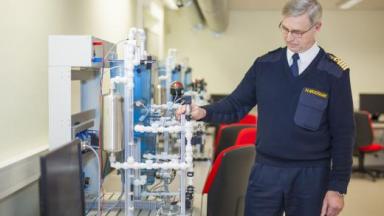