About the Laboratory of Language Technology

The laboratory focuses on the following topics:

The lab was formerly part of the Institute of Cybernetics. Our old web pages are available here. 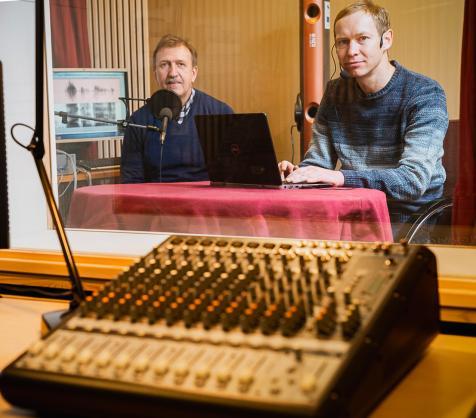 ITS8040 - Natural Language and Speech Processing

We offer supervision of Master theses on topics that are related to our research.

Here is a selection of already supervised theses:

We are looking for talented and hardworking people to do their doctoral studies on topics that are related to our research.

All PhD students at our lab become a member of our team. You will be hired as an Early Stage Researcher, and will get a salary from the university, in addition to the doctoral scholarship. The full compensation depends on the person (better skills and better research output result in better salary), but the minimum is 1500 EUR (after taxes). This is actually about 25% more than the avarage salary in Estonia. Living costs in Estonia are significantly lower than in Western European countries.

We can admit new PhD students any time.

The proposed topics are described below. However, other topics in the field of speech recognition and speaker recognition are also possible (the exact topic can be determined based on the student and her/his interests and skills).

Improving the Intelligibility of Sung Text: the Problems and the Scientific Basis (2022-2026)

Joint project with the Estonian Academy of Music and Theatre

We expect vocalists to sing with intelligible text, but singers also have to obey the constraints which are dictated by the music. Thus, the methods which are used to enhance diction in speaking may not necessarily be fully applicable to singing. The standpoints of singers regarding how to achieve clear pronunciation are controversial, and investigations on the subject are scarce. This project aims to create a scientific basis for the further development of strategies to achieve a good balance between intelligibility and the requirements of the music, such as cantilena and phrasing, when singing in various acoustics and with the presence of the accompaniment. The research method includes the acoustical analysis of the vocal performances and carrying out perception tests of vocal stimuli with systematically modified phonetic and musical parameters. The results are applicable to voice training and could help text writers and composers to reduce problems of text intelligibility.

The Centre of Excellence in Estonian Studies (CEES) is supported by the European Union through the European Regional Development Fund in the years 2016–2023. The centre assembles 15 research groups with more than 60 researchers  and more than 50 post-graduate students from the different research institutions (including our lab).

The goal of the project is to create a system for generating abstractive summaries for Estonian texts. Based on a (long) input text, the system will generate a short and concise text that will reproduce the most important information in the input text, without necessarily using the sentences and expressions present in the input text.

During the project, a large corpus of Estonian document-summary pairs will be annotated, and experiments with different end-to-end summarization models will be performed. Special attention will be given to transfer learning and multilingual
models that are inevitable under low-resource constraints. A method for finetuning the general model to a certain domain will be performed.

The goal of this project is to develop technology that can produce real-time subtitles for live TV  broadcasts (such as news, debates), press conferences and other live events, using speech recognition.

The subtitling system is available here. It is currently used by the Estonian Parliament (Riigikogu) for live captioning parliament sessions (available here, if a session is live), and by Estonian Public Broadcasting (ERR) for realtime captioning of live news programmes and talk shows. News story (in Estonian): https://diktor.geenius.ee/rubriik/tele/etv-otsesaadetele-saab-tanasest-valida-automaatsubtiitreid/

Within this project, we implemented a system for producing transcripts for the Estonian Parliament using speech recognition, automatic punctuation and speaker identification technology. The system outputs fully punctuated and "nicely" formatted text and identifies members of the parliament based on their voice. The system has been deployed to production. News story (in Estonian): https://www.err.ee/1134953/eesti-viimaste-stenografistide-too-vottis-ule-robot

Web applications that allows to transcribe long speech recordings, such as interviews, conference speeches. It uses our latest Estonian speech recognition technology. Also does automatic punctuation and identifies Estonian public figures based on their voice.

The application can be used via an old interface (transcripts are sent to e-mail) or new fully web-based interface that also provides web-based post-editing capabilities.

For many years, Estonian speech recognition was natively not available for Android. Therefore, we developed an Android application Kõnele. Kõnele works as a virtual keyboard: when the user wants to dictate text in any application (e.g. GMail), she/he can switch to the Kõnele keyboard and use speech recognition to input text.

Kõnele uses client-server based speech recognition: Kõnele records user's speech and sends it to the lab's server, and the server sends recognized text back to the user's device.

The web application uses speech recognition models to generate phoneme boundaries for Estonian speech, based on a provided orthographic transcript. It is primarily used by phoneticians to generate initial phonetic segmentations for phonetic corpus annotation.

An interface to a large collection of automatically transcribed Estonian radio broadcasts and some podcasts. Serves mostly as a showcase of our Estonian speech recognition technology.

VoxLingua107 is a speech dataset for training spoken language identification models. The dataset consists of short speech segments automatically extracted from YouTube videos and labeled according the language of the video title and description, with some post-processing steps to filter out false positives. VoxLingua107 contains data for 107 languages. The total amount of speech in the training set is 6628 hours. The average amount of data per language is 62 hours. See more...

Spoken language identification model trained on this dataset is available in the Huggingface model repository.

ERR2020 is a speech corpus that contains 389 of manually transcribed TV and radio shows from the archive of ERR (Estonian Public Broadcasting). See more...